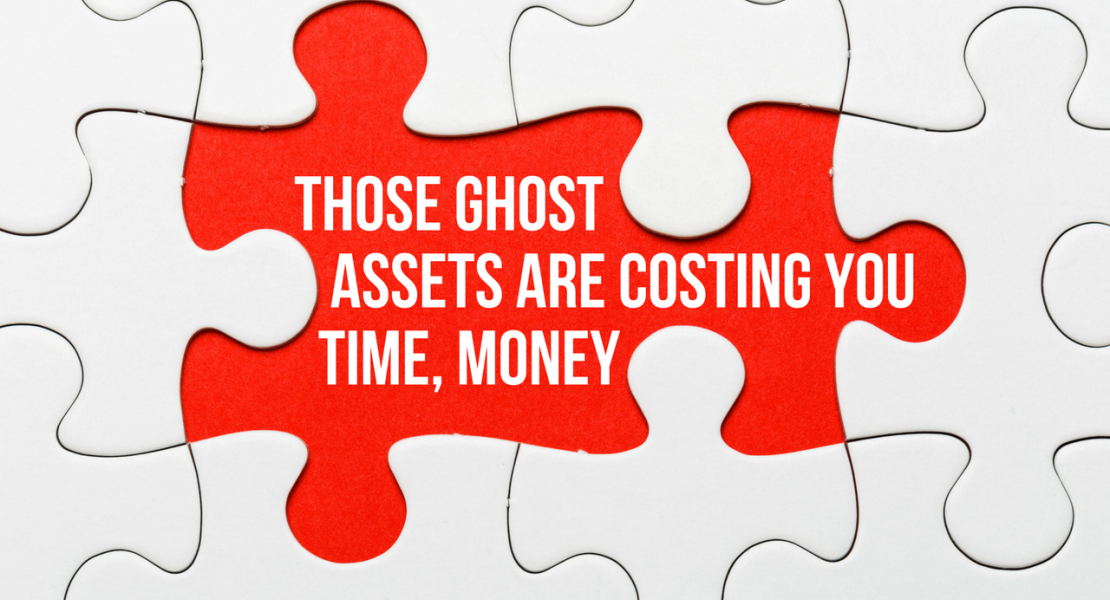 Hidden assets on your ledger are akin to gifts hidden in the closet and forgotten. Forgotten gifts, hidden assets, ghost assets, zombie assets once had potential but are now financial drags.

Because you forgot and bought other gifts/assets (same items, duplicates) your bank account ledger - often in the form of a spreadsheet - is leaner than you anticipated, your floor space is more limited and your liquidation possibilities for those gifts/assets are negligible.

Depending upon the gifts/assets, your insurance may even be higher. (You did buy a maintenance agreement on both sets of gifts, didn’t you?)  Those hidden gifts, potentially to be someone else’s assets, are still yours, your assets, and, unknowingly, your burden.

Furthermore, if you thought you had a gift in the closet, but you forgot you had gifted it, you have a different problem. So too, in accounting when you think you have an asset on the ledger, but it is gone from physical inventory, there is a liquidity problem.

Hidden assets can be ghosts and zombies. According to wasp barcode technologies “a ghost (hidden) asset is a fixed asset in a general ledger (GL) that cannot be accounted for because it is physically missing or otherwise rendered unusable.” In the same post, a small business survey conducted by Wasp found a “shocking 12 to 25% of the assets in a fixed asset ledger don’t exist.”

According to  Britt on March 10, 2016 in Dynamics GP, Dynamics GP FAQs and User Tutorials, “a zombie asset can be found during the physical audit; however it is nowhere to be found on the fixed assets register.” For small businessmen to better manage their bottom line, finding and dealing with hidden assets, ghosts and zombies, is important.

So is it time to find out if you have hidden assets affecting your bottom line?

Is it time to clean your financial closet by taking a comparative look at the assets on your general ledger and the assets that tangibly exist?

Is it time to deal with those hidden assets?

Is it time to implement strategies, such as RFID tagging, to eliminate hidden assets altogether?

If so, good accounting practices aided by barcodes and RFID tagging can alleviate the financial loss of hidden assets.

Surprisingly, physical assets often assumed to be in place are fixed assets such as office equipment, machinery, vehicles, and real estate. These hidden assets, ghosts, like the already gifted gifts above, affect the money you have to spend and your financial stability as a company.

An accident causes a company car to be totaled. No longer usable, insurance settled, the car is still an asset on the company ledger until removed. Because of the emotions associated with the tragic accident and the ensuing legal battles, bookkeeping falters. “Gone, but not forgotten” is apt: the car remains a ghost on the general ledger creating the expense of insurance and taxes until the error is caught.

If an RFID tag had been attached to the totaled car, the car’s barcode or RFID tag would not have transmitted a signal to a reader, a circumstance that would subsequently alert system administrators to the car’s absence. The system’s administer would identify the reason an alert was triggered and take appropriate action, removal or rectification. In this case, the car would be removed from the ledger and recurring charges would be stopped. Emotions affecting business transactions related to the totaled car would be little cause for financial interruption.

If an RFID tag designed for tracking had been attached, company records lost in the accident could be accounted for, retrieved or confirmed as completely lost. Such information is a benefit especially if the records contained proprietary information that would put the company’s profits at risk.

Technically, zombie assets aren’t hidden assets at all because no asset exists. What is hidden is the knowledge that the asset should no longer be on the books.

In another scenario, a school district is adding 10 teachers to its payroll because new industry is moving into the area. The added teachers will share classrooms with established teachers, but each incoming teacher will need a desk to stay organized.

The school district stored unused desks of all sorts, including teacher desks, in a little-used storage space off campus during an enrollment decline. With increased enrollment, desks will be needed.

If the stored desks were not repeatedly inventoried in annual reports by teachers or custodians or if the location of the desks can’t be found and, therefore, the desks then are thought to be sold, more desks will be purchased for incoming staff. The desks are zombie assets. The district budget will take a hit.

However, if the desks are accounted for and can be found, the financial status of the district will remain static. A barcode or RFID tagging system, some of which include tracking capabilities, will enable the district’s budget to remain static because of accurate inventory and physical presence. First, once a barcode or RFID tag on a desk is recognized by the system, the asset (in this scenario, the desk) exists in inventory, impervious to nescient employee behavior. Additionally, the RFID tag will also indicate asset presence and, indeed, location of the asset if it is electronically enabled and connected to a more sophisticated RFID assisted general ledger- presented, usually, as a spreadsheet.

(The average price for a teacher’s desk with file drawers is $400. Knowledge of the desk means a substantial $4000 savings for the district.)

Again, hidden assets, ghost and zombie assets as they are sometimes called, affect your books because they are somehow nebulous either on the ledger or in physical form. They can disrupt a company’s efficiency, but more importantly, they can count toward a company’s insurance and tax liabilities. As seen in the scenarios, using physical counting and tracking to link inventory to audit can be inefficient, impractical and costly. A barcode or RFID management system allows for accountable physical presence of an asset and precise recordkeeping of its presence.

The barcodes and RFID tags used in the system, however, need to be up to the task. For the system to succeed, tags need to fit the environment for which they were designed and encrypted properly. Be sure the tags used in such a system are durable for the environment and the coding verified and accurate. A Metalcraft barcode or RFID tag is guaranteed to do just that.